Day by Day in Bermuda 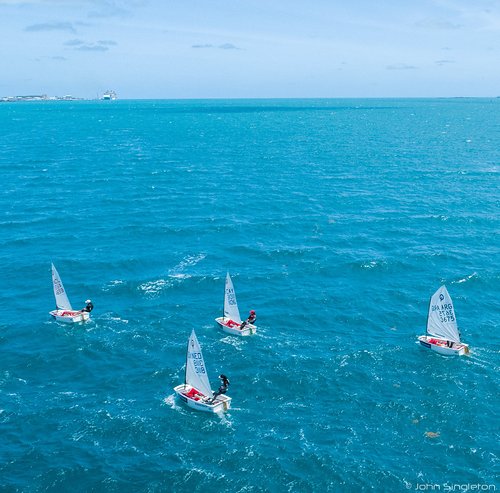 Following the win from George Lee Rush at the 2019 Renaissance RE Junior Gold Cup in Bermuda, here is a summary of how the regatta unfolded -

Format: 3 days fleet racing (4 races on each of the first two days, and 3 races on the third, for a total of 11 races with one drop). All of these races were sailed on the Great Sound where the America's Cup boats raced. Single harbour race on the last day inside Hamilton Harbour, which is very small and confined and surrounded by hills and buildings.

Training: A consistent 20/22 knots gusting up to high 20s with significant chop. The international sailors had two long days of training. George was looking very quick along with a couple of the Europeans and the Argentinian sailor Tadeo Funes de Rioja who is 15 yrs / 61 kilos. He was very quick upwind in the strongest breeze but George would usually catch and pass him on the downwind. Lots of fun had despite the strong conditions with a lot of banter and talking nonsense.

Day 1: Pretty overcast with 10 - 12 knots. Steady breeze with relatively small oscillating shifts. George had a cracker start out of the blocks with 3 x 1sts and a 6th (his drop). Fast upwind and down, opening up some very good leads. Matheo Capasso (Cayman Is) and Maria Gracia Vegas Trivelli (Peru) and Yanne Broers (Netherlands) had top results, and Sebastian Kempe and Christian Ebbin of Bermuda were the top local competitors.

Day 2: Beautiful sunny Bermuda day with 17 - 19 knots and gusts just over 20 knots. Conditions were much more tricky than Day 1 with the wind more affected by land. The result was large, less predictable shifts and larger holes. Virtually all sailors were struggling for consistency, accumulating big drops in the teens or higher, George hiked hard to finish 2nd, 4th and another 1st.

Day 3: Again a cracker sunny Bermuda day starting out at 16 - 19 knots and dropping slightly as the day went on to more like 12 - 14 knots. Direction was N again, but with more significant and unpredictable shifts than Day 2 and even larger holes. While it was looking possible for George to win the regatta without having to count the result of the Harbour Race on Day 4, a conservative approach was required. Local sailors had commented that the final Harbour Race had been the undoing of some highly placed sailors last year - a real risk because of the harbour venue and sub 5 knot forecast.

George was leading race 1 up the first beat but Yanne Broers pipped him to the top mark and tacked on him in a light patch right at the mark. A series of 'down speed tacks and being covered by other approaching boats caused him to have to dip several boats, losing 5 cheap places in a matter of seconds. What was looking like a win or second placing became a case of catchup. He managed to make it back to 5th with the Dutch and Peruvian girls getting top results and Magnus Ringsted from Bermuda also placing highly. George led race 2 from the start until about 5 metres from the finish, only to be pipped by Tadeo Funes de Rioja (ARG) who had taken a complete flyer off to the left of the course and hooked into his own private breeze. In race 3 George got a little stuck out to one side of the course with nothing to come back on so rounded the top mark in his lowest top mark rounding by far at 10th. However he rallied strongly over the remainder of the race to limit the damage to a 5th placing, not easy with the other sailors being of such high calibre.

End of Day 3: George had the regatta already won without needing to sail the final Harbour Race the next day. He had been by far the most consistent sailor with his worst result being a 6 and bagging 4 wins. One other competitor had 2 wins and two competitors had 1 race win each. All other competitors had much higher drops (in the teens or higher).

The international competitors use charter boats which are in good condition but about 7 years old, similar age foils and older more flexible spars than they would use normally, whereas the top Bermudian competitors use their own boats with their normal equipment. So, being competitive speed-wise with this equipment is encouraging for regattas going forward.

Great fun was had off the water by all. Dad was pressed into service as one of two mark-layers on the course, the adult Gold Cup having soaked up most of the local resources. All kids are billeted with local families (usually with another international sailor), so they get the full local experience.

All in all a great success on and off the water. Congratulations George. The 2019 Opti World Championship is next up in Antigua.

More about the Junior Gold Cup 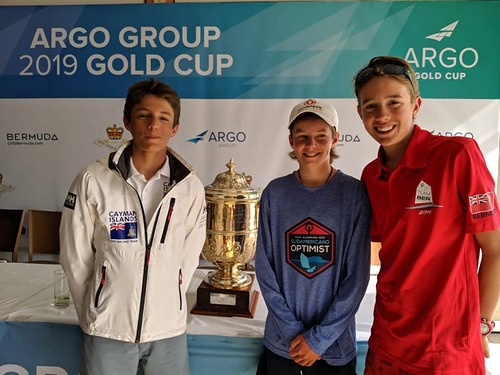